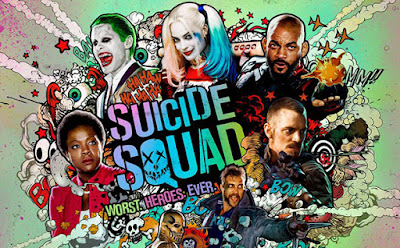 1. I was hired to be Ben Affleck’s chin double. You know, in his new movie.  When he is in the Batman costume and all you can see from him is his chin. Thats me! It makes sense, because why would the producer pay a famous actor big bucks to be there, if he can get the same shot for much cheaper. I mean I don’t work for scale, but you know, compared to Big Ben, I take pocket money. And I get it. After all, the one thing I have going for me is the Ben Affleck look-alike chin. I never really did well in school or achieved anything worth mentioning, but when I was discovered, it kinda changed my life. Now I have a 3 year contract to stand-in for Ben's chin whenever needed! And life is sweet.

2. So there I am, on the set of Suicide Squad. David Ayer, the director, is talking to that lady from The Help and Doubt. Later I learn her name is Viola Davis. What a nice and kind woman! She noticed my chin right away, and called me Chinfleck. And it stuck. I found it endearing. But there she is, being told by the director to call Robocop a pussy! And a bitch! You don’t call the Robocop a bitch!  Joel Kinnaman,  the actor who plays Rick Flag, is a nice guy and all, but I tell you: he did not like it one bit, that Viola called him a bitch. You know what I say? I say: time are a changin', buddy! Her character, Ammanda Waller, is one strict boss in the movie! A bit too one dimensional, for my taste, but hey, she was commited to it!


3. But David Ayer is all about "the method". Yeah. He is kinda weird and seems a bit manipulative at times. You saw End of Watch? Or Fury? He did that shit. He can be dark as hell! And he likes to write some messed up stuff too. Like the Training Day. Oh boy, did Denzel nail that! I wish I had Denzel’s chin, to be honest. But I guess I can’t have it all. Thank god the Warner Brothers are doing at least three more movies with Affleck as Batman, so I have some good gigs ahead of me! They may also do a next Suicide Squad but it depends on the sales from this one. Though they had some troubles agreeing on the final cut of the movie, you know, between Davids  dark messed up version and the one the producers wanted, all happy-go-lucky & fluffy, but the movie is gonna do well in the box office it seems. Good for me!

4. On this job I had fun! I even got my own trailer! It was tiny, and smelled a bit like animal piss, but I liked it, cause it was all mine. Except one day, in the morning, when I get in there, I find some joker in my trailer, playing with a dead hedgehog. I kid you not. Scared the bejesus out of me. I think the dude also pissed all over in my trailer. That would explain a lot. Of the smell. I couldn’t remember which movies I knew the guy from, but the moment he turned my way and said "would you like to dance with me in the pale moon light" it hit me! He was the gal in Dallas Buyers Club! Jared Leto! Man, I tell you, that’s one weird dude. No wonder he gets all these strange roles, like in the American Psycho, Requiem For a Dream, or Mr. Nobody. He’s got these piercing blue eyes of a psychopath or a robot.  And he also held what seemed to be a used condom in his hand. Creepy! Before he left my trailer, he laughed maniacally and threw a live rat at me. My takeaway was: don’t trust the guy who plays with animal carcasses. I stayed away from him from then on. And he seemed to stay away from the shoot.

5. The best part of being in the movie was this lovely beautiful super-hot and mega sexy girl, Margot Robbie. Yeah, you know who she is. That’s the girl that showed her cooch in The Wolf of Wall Street. She is so smokin! I think I love her. She didn’t like the rat that Joker guy got her. Jared. He is so weird. Who gives a rat to a lady? Mind you, the rat carried a love letter for her, and Jared claims he was just trying to stay in his role, but I tell ya, that’s no way to impress a darlin like Margot. I tried my own way. In my Batman costume, with my hot Bene-esque chin showing, I went over to her and said in my best Christian Bale Batman voice (I love Ben, but lets face it, his bat-voice sucks!) "Hi, is the Joker bothering you, sweetheart?" She kicked me in the crotch! And man, I tell you, Batman’s costume is NOT kick-proof in the crotch area. It hurt! Margot said she was also in the role, trying to do the "method" for the director. Her role as Harley Quinn, the masochistic psychiatrist apparently would do that. Kick me in the balls. Ok then. It’s all the mad directors fault!

6. Speaking about how bat-shit insane the director is: he made the whole cast tell him about their childhoods and their deepest fears and secrets. Will Smith said he was a scientologist, but man, that’s no secret. His fear was that people would find out he was in a cult. Yeah, you don’t have to fear that, buddy, that already happened! The director also brought a therapist on the set. I think that was a smart choice. Cause he would use all the fears and childhood secrets the actors told him in the movie making process, to make them all extra angry, or vulnerable. I mean, if they need to go over the memory of their grandmother stepping on their baby hamster when they were little, to deliver a believable sad-scene, I call bulshit, they are no actors! The one guy that seemed to have a perfectly happy childhood and no painful secret was this super-hunk, Jay Hernandez. I liked him. He plays Diablo in the movie, a guy that can make and throw fire. That’s so cool. I think they picked him for this role because he is so hot, that the ladies around him faint from their loins being on fire or something. You know, he is the hot guy from Bad Moms, or the Expanse, but I personally remember him from The Hostel. He almost turned me gay in that!

7. I tried to follow the story and understand the movie they were making, you know about a bunch of psychotic super-villains that are somehow the last hope to save the world, and by the world, I mean the DC Comic universe, Gotham and all, but it seemed like the costumes and the tricks they played on each other were more important than any actual story they were "developing" so I gave up after a while, on the effort to understand anything other than: the boss lady is mean, the hot guy can throw fire, Will plays Hancock-meets-the-guy-from- Seven Pounds, Margot is hot as fuck, don’t mind the crazy, and Jared is trying his best not to be compared to Health Ledger, and he succeeds, he is not as scary, just weird, but kinda good weird, I would ship it, you know? The acid falling scene had me shake my head, cause like, isn’t acid supposed to hurt? but then again, I am no method man so who cares. I would give this movie a 4 for being so lazily written, but within the genre of "fun silly superhero movie for teenagers" I give it a 5, an extra point for Margot’s ass.

8. What I didn’t like about the experience? Well there were just too many actors on the set. And I don’t mean extras. But the "key characters", there were so many! They hardly fit on the movie poster and you wanna fit them all in the movie and give them unique personalities and back story and not bore the audience to death? If you ask me, they should have done much more Batman in the movie, and hey I know it sounds like I am biased, but I am not, and here is why: I would also opt for more of the Joker guy on screen, and I really hated that Leto creep, but he was good in his role, I give him that. But you know when he is the creepiest? In that one scene in the movie where he is not wearing any make up! I tell you that’s the really SCARY piece! Its like when they show Escobar in the Infiltrator! 15 seconds or so, but you are shitting yourself already and dialing 911! Other than too many people in one film, I think for all the dark and insane stuff the director did to the cast on the film,  the final product was surprisingly mellow and even light-hearted. Like they are all best buddies immediately, and don’t really play villains but have hearts and souls? Where’s the fun in that? Also I heard the director had to write the script in less than a month or so, and I tell you, the only dude that can pull shit like that off is Sylvester Stallone (Long Live Rocky!) And David aint no Sly! It shows. The script is weak!


9. What I liked about the experience? I mean I got to hang out with some really famous people. And then bunch of people that nobody knows and after this movie will not know any better, cause there were in it only for like a few scenes or were under a mask the whole time, so who cares, right? But Will Smith plays a cool guy, Deadshot, and is kinda fun to watch mess with Ike Barinholtz! yeah, that’s the goofy guy from Neighbors, that’s not SethRogen! He had some of the best scenes in the movie, I tell ya. And the cutie patootie, Margot, most of the movie she is wearing these tiny shorts with half of her ass hanging out and this wild make up, now I am just a regular joe, but I dig that. Worked for me. The Eyebrow model, turns out her name is Cara Devilingne or something like that, was a nice gal too. She changes into the Enchantress and the movie shows some cool tricks around that, it was fun to watch them talk about how her eyebrows don’t need any work in post-production, it was big and ancient-mean-spirit-like already! Oh and one more thing: they played some cool ass music on the set. That got me dancin'! Even in the heavy as shit Batman Costume. The soundtrack is as fine as Margot’s crispy ass.

10. Who should see the movie? You know, you all should, because my chin is in it! Even though it’s in it only for like 90 seconds (and there is no more batman in the movie either, I didn’t even meet Affleck at all!) there is ton of other fun stuff going on. So if you like fun staff, girls with their asses hanging out, guys with make-up that send girls rats, and Will Smith thinking about his fears and secrets on camera, then this is a flick for you. If you were looking for something darker though, or with a better story, or less characters and more substance, I recommend you pass. Unless of course, you have a thing for my chin, in which case, go all in and wank away! Yours truly, The Chinfleck.