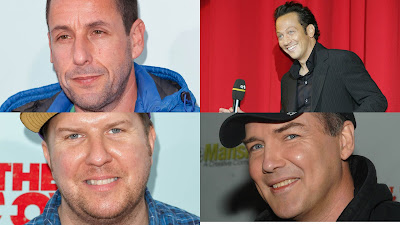 1. Whenever I feel kinda sad or down or whatever, I just wanna pop in an Adam Sandler Movie. I love him. He has always made me laugh. I like just about all of his movies and have always felt comfort in watching them. If it is Saturday night and if I wanna watch something fun, I'm gonna watch an Adam Sandler movie. I am looking at Adam Sandler and thinking: God, I wanna get a piece of that. I wanna learn from that dude. Now, for those who were just thinking: "oh gee you can't tell a good movie from shit, if you say that." - you know what? Those first six lines were not my words, even though I can for sure and happily sign off on it too. But these words were actually said by Paul Thomas Anderson when being quizzed by Roger Egbert on "why the hell would you work with Adam Sandler".

2. Some fun facts - did you know: (A) Punch Drunk Love was written for Sandler? (B) The role in Inglorious Basterds (that ultimately went to Eli Roth) the Bear-Jew Donny Donowitz, was written by Tarantino for Adam Sandler? And Sandler wanted to do it but his commitment on the Funny People prevented him from accepting Tarantino's offer. (C) Martin Scorsese himself wanted Adam Sandler for a movie? As Joey Bishop, in a script written by the same guy (Nicholas Pilegi) who wrote the Goodfellas? (D) Sandler was one of the top two candidates to play in Collateral, opposite of Tom Cruise? Yes, the role that eventually went to Jamie Fox, because -according to Mann himself- "while I love Sandler, Fox had more of dramatic experience". (E) Tom Mc Carthy, yes, the guy that made the movie that scored  Best Picture last year (overrated but still very good Spotlight) can't say enough good things about Adam Sandler and what a great actor and human being he is? (F) Appatow wrote Funny people specifically for Sandler? Soo… let's stop with the "only-people-who-can't-tell-good-humor-and-have-poor-taste-in-movies enjoy Adam-Sandler" bullshit, shall we? And just agree to disagree on whether Adam Sandler is a good comic and actor or not.

3. I personally love his work. But saying "I love Adam Sandler's work" in public is still a toughie, though. Because the media has painted a very good picture of Sandler being somehow low-class, and for the "stupid" only. As Tom Mc Carthy says, the media "have it out for him". I concur.  Especially in a group of highly educated people, when you say "I am an Adam Sandler fan" you get a lot of "what??" and "really??"s. But even then, after a while, once they get over the fear of being judged and/or over their pseudo-intellectual pose, everyone is usually able to name at least a few Sandler movies or sketches that they really like. There it is, the CEO loved The Waterboy (The Waterboy, REALLY?). The general counsel was mad in love with the Wedding Singer. And the auditor was "defeated" after seeing Reign Over Me. And more people than you may care to admit are still laughing out loud to Sandler's old bits from Saturday Night Live or his stand up routines. In the end, Sandler is someone whose career has been incredibly and steadily successful for more than 20 years. He has only a few peers in that. One being Tom Cruise, for example.  So Both of the actors must be doing Something right. Oh and did you know that there was a role Tom Cruise got only AFTER Adam Sandler declined it? I bet you didn't, did you. Yeah. That happened.

4. So what did Paul Thomas Anderson find out during his cooperation with Adam Sandler? Apparently the same thing I did, when I attended Sandler's show in Brooklyn, at the Kings Theatre this week. I knew Sandler was funny, but I learned he is also amazing with his fans. He gives them what they want from him. And he is either the best actor in the world or a genuinely nice and down to earth dude.*

5. I have been to many stand up performances. Hell I dabble at stand up myself. I know what effort and energy it takes to make a crowd of people laugh every 20-30 seconds. For the whole time you are on stage. Sandler can get that. Sure, a lot of it now comes from his fame and success, people are incredibly hungry to see him perform live, they already like him and his material, and cheer at Sandler's first words in the Scooba-Steve character or singing the Kangaroo song. Both were requested (or rather grizzly-yelled) by someone in the crowd, and Sandler complied. He listened to the crowd, he knew he was there to please them, not the other way around, he knew they paid big bucks to see him, and he was kind enough to fulfill all their requests. I haven't seen any other performer (stand-up, music, or whatever) do that. Ever. I went to see Louis CK a week ago. Louis gave us a great show, he really did. It lasted about 90 minutes between just two people, and thats tough. Louis was great. But even though it was in a smaller theatre, Louis didn't really engage with the crowd. I get it, it is not something that fits every type of performance and every performer. But it's something that makes people happy. And that takes me back to PTA's wise words. Sandler is a great communicator. Who knows what he is best at: making people happy.


6. So how was the Do-Over Tour show? Which was staged to promote the new (Netflix produced) Sandler movie The Do-Over? The show was very good. It was almost 3 hours, and it had the following people on stage: Rob Schneider, Nick Swardson, David Spade, Norm MdDonald, Chris Rock, and Adam Sandler. Oh wait, don't let me forget the cameo by Steve Buscemi. It wouldn't be a true Adam Sandler stint without a Steve Buscemi appearance, would it.

7. Was the humor very Sandler-like? Yes. Did it include jokes about diarrhea, blow jobs, small dicks, ugliness, and pussy farts? Yes. Were they good jokes? Most of them yes. A nice surprise was Nick who showed why he became part of the Sandler pack. He is talented and funny and better than the simple physical comedy he often resorts to in movies. Is Rob Schneider the best stand-up comedian ever? Certainly not. I would actually rate him the lowest from the whole bunch, and that's coming from someone who likes him a lot (watch The Hot Chick or any of his SNL bits, to see his true comedic talent). David Spade? Was being David Spade. A goofy guy with somewhat predictable jokes but performed in a very amusing way. I loved he did a whole bit on mirrors in clothing stores. That's the first time I saw a guy do it, and it made it that much better. Norm McDonald is an amazing performer. Heck, he was the last act on David Letterman (one of his favorites) and that should tell you something. And he didn't disappoint. He has such a great delivery, that it makes you think Norm reading the phone book would be funny. Chris Rock got the crowd wet'n'wild. His jokes felt very fresh, and I bet even Leonardo DiCaprio, who was the butt of Rock's jokes would be laughing at them. The joke about DiCaprio joining ISIS really killed. Then comes Adam Sandler. The headliner. Standing ovation (was given to Rock too) right away. Sandler himself does almost an hour of material. Half stand-up, half music, some new, some old, but all loved by the crowd. He stops to joke with the crowd, he stops to take requests, he accepts a drink from a fan, and wears a hat that another fan threw at him. He shows why he is successful for more than 20 years. He is funny, but he can be  also touching (yes I cried, cause when he says he still misses Chris Farley, you believe it). He is also incredibly upbeat, positive and not afraid to make fun of himself.

8. What I didn't like about the show? I am trying hard, believe me. To come up with something. I may say that there were a few jokes (mostly from Rob Schneider and some of Swardson) that I didnt' find that funny.  But I was still smiling. That's about it, but it's not worth taking off points for.

9. What I liked about the show? I loved how long it was and that it had me laughing (or crying) almost non-stop for 3 hours. 3 fucking hours, you get it, right? Not even having sex or eating cake keeps me entertained for that long. I loved the fact Sandler builds his shows around friendship, communal spirit (there was a lot of remembering Brooklyn, where most of the performers were from), gratitude and respecting the fans and what they want. And Schneider redeemed himself in my eyes when he came back on stage to sing a duet with Sandler. His astronaut Ilya was hysterical. I loved the Bruce Springsteen song. Laughed to the disco song. Or the 4th edition of the Hanukkah song. It was all there. And more.

10. Who is the show for? Well, firstly for all the people that like or love Adam Sandler. Also for all people who like stand-up comedy. And for those that want to get psyched up for the Do-Over movie. Is it for the Sandler haters? I am not sure, because a lot of what Sandler did was in line with what his fans wanted at the time which coincidently is what a lot of the haters hold against him. The man-child attitude, silly song and crass topics. But they were done well. Sandler may have some better material or skills and certainly doesn't need to do things for money or fame like some say. He has got that. He does it, or very convincingly has us believe so, for his fans. I dig and respect that. And I think you could too. I bet if Professor X was to look at Adam Sandler, he would tell you: "there is so much good in him. Not just pain and anger". Explore it. If you don't like his comedies, look at some of his dramas. If you know and don't like his movies, know and don't like his stand-up, fine, but don't be "that guy". The one that contributes to spreading the rumor that Sandler is not a talented performer or only people with poor taste like him. Because that is, simply put, just not true. And also because that kind of ill-informed thinking is the reason why Paul Thomas Anderson - one of the film-makers that have yet to produce a critically frowned upon movie in his more than 20 years of a career- when making an "Adam Sandler movie" Punch Drunk Love didn't get the commercial success he could have gotten with it. Because of the narrow-minded fans on both sides. Many PTA's fans didn't go see it because "ew, it has Adam Sandler in it" and many Sandler fans didn't go see it because "ew, it's made by that artsy director". In the end, it's not just both sides that miss out on seeing a good film, it's the whole game of cinematography that takes a hit.