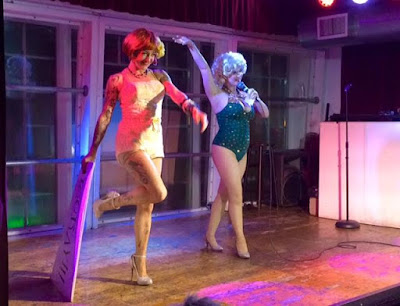 1. A couple of weeks ago my work brought me to San Francisco for a few days. As it happenes, I had only one free evening, so it was a tough choice on what to do in this spectacularly interesting city. In the end,  based upon a recommendation from a fellow human being I decided to spend my free time in a club called  the DNA Lounge.

2. It’s an establishment owned by Jamie Zawinski. Name I was told I should look up. I did. As a person that struggles to use computers for things other than sending emails at work, watching Netflix after work and brainless meandering around on the internet in between, I wasn’t able to do the "aaaw" in a way I presume I was expected to do, but I totally believe my good attempt at it was deserving.

3. As a former bar/club owner/manager myself I am always both interested and somewhat apprehensive when going to new places. After 10 years that I had once spent in that business I now struggle to see things the way I did "before". Without thinking "would I hire this server/band/performer/dj" or "what’s wrong with the sound system here" or "that’s an interesting choice for house vodka" and so on.  Of course there are also places you marvel at and admire, be it for their atmosphere, staff, or quality of service or all of the above. But they are rare for regular club goes I think, and even more rare for club owners, current or past. The distraction is there.

4. But here was a night that presented a greater distraction and lots more fun than anticipated. I have been to San Francisco before, I have been to strip shows and Burlesque shows before. Hell, we had girls strip or do body painting sessions in our club too, but it has been some time ago and I may have forgotten how great these shows can be. And not just because of all the wonderfull nakedness.


5. So DNA Lounge was a pleasant surprise. First off - I love the idea of having the combo of: a smaller venue and a bigger venue connected by a 24 hour pizza place. And you could tell the club goers loved it too. People would wonder in and out from the club into the pizzeria, cafe and upstairs to the lounge and back, and although fluid, if felt extremely natural. And as I later found out, the served good pizza, too.

6. On the night that I was there, there was a Hubba Hubba Revue - a Neo Burlesque Show upstairs in the loungier area, and a Death Guild - a Goth/industrial gig in the downstairs club. I went to both, and of course had to try the local pizza in between as well. Now mind you, the one thing any lawyer probably wants to do after a hard day at work kinda deal, is go see naked ladies. And eat some pizza. But I discovered that being exposed to loud industrial music is also very pleasant, after a conference full of lawyers and legal presentations. It takes your mind off of the struggles of being a servant of evil, or having to listen to a fellow lawyer (probably less of a fellow human-being) yap about why Trump is a great choice for America. Turns out loud noise music and a bit of Goth culture is able to cure you from that horrific experience in just minutes!

7. But first things first. The lounge opened at 9, with the Burlesque show starting at about 10 pm. At first when I walked in, I felt two things. The first one was relief that I went to my hotel first and changed out of my lawyer outfit, because that would make me feel like an idiot in the crowd of the punk / Goth / alternative / burlesque looking people. I almost wanted to show them my tattoo and piercings upon entry, just to prove that I am ok, I once also had a fun life, before becoming a boring lawyer. But the second thought was - wow, it really wouldn’t have mattered here. The staff as well as  crowd was super accepting and friendly.

8. The space itself is so intimate and cozy! Upstairs you have a choice of seating or space for standing around, depending on if you want to be closer to the stage (and sit down) or closer to the bar (and stand). I chose the girls and sat close to the stage. The burlesque show lasted about 90 minutes, with a short break in between, and boy can I tell you it was a good show. All performers were great at what they did, but each also brought something unique to the stage. Be it their body type or dance choreography or overall genre, each was different and each compelling. I felt like I fell in love at least twice during the show. The crowd seemed to share my sentiment. The joy both on and off the stage felt genuine.

9. The great test of the service was when I asked for A) something odd and B) something they didn’t have. Now at many places the response is "sorry we don’t have it/can’t do it" and that’s the end of the conversation. Not here. My drink of choice for the evening was milk. With lots of ice. Basically a white Russian without the vodka or Kahlua. It’s not That odd! They didn’t have milk at the bar, but not only suggested that the pizza place downstairs might have it, also said they were ok with me bringing it upstairs. I know bars don’t survive on people drinking milk, but come on, what’s a person that doesn’t drink alcohol or sodas to do on a night out? At least I tip well for my milk on ice!

10. After many glasses of milk and about 2 hours upstairs, the show was over and I went to the Death Guild part of the night, and joined other club goers in dancing and relaxing in the very dark, foggy hall. With some very loud and industrial music, that somehow was exactly what I needed. People could dance on the stage, or on the balconies (oh the balconies!), or anywhere they wanted, and so they did. It was this level of freedom that brought on the relaxation. Now top it off with the Dj actually doing a great job, fun crowd, several bars and additional space, and the fact you could pop in-and-out for some more milk and pizza just next door, and  it becomes a perfect evening. Which ended well after 2 am for me, when my leftover pizza and I were in the cab on our way back to the hotel. I was feeling rejuvenated and happy. It was a night to remember. I only prayed I would also remember to get up in the morning and go to my presentation. 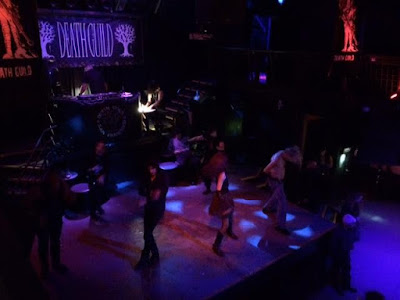 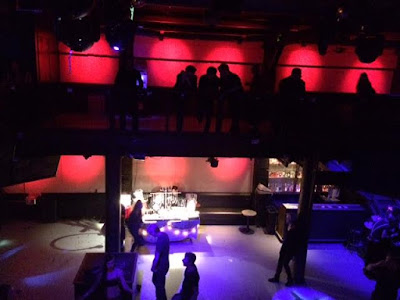 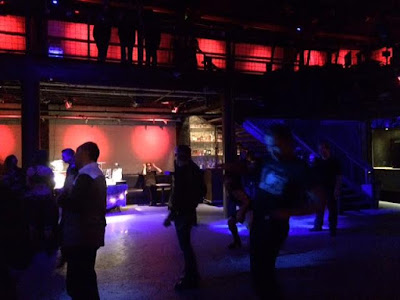