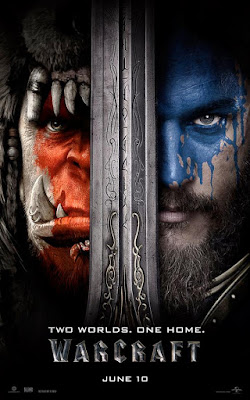 1. First things first. I have never played Warcraft and even more: I have never been exposed to any information about it, other than the one episode on the Big Bang Theory where Penny turns out to be somewhat addicted to it for a while. Also, I feel I should mention my favorite computer game was Tetris and I never progressed beyond that with games.  I also suffer from a mild case of ADHD. Alright?

2. Now that we cleared that, I want to say I have nothing against gaming and can recall other movies based on video games that I enjoyed. To name a few: Resident Evil, Max Payne, Final Fantasy, Need for Speed or even Hitman: Agent 47. And I liked The Lord of The Rings and am an avid fan of the Warcrarft director Duncan Jones. I loved Moon and enjoyed Source Code a lot. But Warcraft confused me and couldn’t keep me entertained at the same time.

3. Because the level of my confusion and boredom was so big, I decided to show you just how bad it was (for a non-gamer). And I wrote this review without having googled or discussed the plot and all the things that I may have missed or just misunderstood. I slept on it, though, because yesterday right after the movie I'd have probably given it an even lower score. To be clear: I knew what I was getting into and all I really expected or wanted from the movie was to be somewhat entertained for 2 hours, while I chew on my unbuttered popcorn and drink my diet coke. I wanted this fun-looking, impressive-budget-and-great director-having live-action movie to do it's one job - take me out of the everyday reality and have me focus on good & evil fighting it out. I am not reaching for the stars here people. I managed to enjoy Jack and Jill, and Dungeon and Dragons, for crying out loud. I can be very forgiving.

4. But this just didn't work for me. It felt shallow and flat plus I couldn't really figure out who to root for, to begin with. Now maybe this could have been the director's intention, to be deep and have us feel ambiguous about the characters. But then again, Warcraft is no Breaking Bad. And I simply couldn’t tell the "good orcs" from the "bad orcs". There were just too many orcs that looked similar. Am I supposed to recognize their adherence to either good or evil based on the slightly different shade of green their skin is? Or mildly different clothes, teeth or voices? After a while I figured out: there was this one "really bad orc", I call him the "Demon orc". Then there were a bunch of slightly less evil but still bad orcs. I will call them "Trump Demon Supporters." And then there was (but I am still not sure about that) one or two key "good orcs"? And did they have a baby? Or was it someone else's? I wanna know: who was the baby? And why should we care about it? Should we? And why is Edward Snowden still in Russia?

3. Anyhow, the story how I figured: A Human king (a weirdly puffy looking Dominc Cooper) rules his world peacefully, until one day his people come across a half-human half-orc female (sexy Paula Patton aka something to the sound of Cortana?) and find out there is a portal through which the orcs plan to come to the human world and invade it. Why? I am not sure. They probably ran out of something important back in the Orcland. Or was there a civil war going on? Between different orc-clans, and that is why they wanted to take a hike and settle in the human world? Or did they actually want to wipe out the humans just for fun? Or was some old prophecy telling them to do so? There was a lot of talk about villages burning and prisoners, but why was that happening I am not clear. But if the Orcs were the ones using the portal to infiltrate to the human world, why were there human prisoners in the Orc-land, so Cortana could learn how to speak English from them? Never mind. She was pretty smoking so who cares.
4. The King then sends his main military man (uninspired Travis Fimmel, looking and acting like a very Beta-Aragorn) to....do something. Meanwhile there is some kinda war happening, although I am unsure on between whom and whom it is, exactly. There is also this Hunky Librarian (poorly acting Ben Schnetzer) who is maybe studying to become a magician? And has a role model called the Guardian (painfully underused Ben Foster) that he looks up to? But the Guardian acts weird. Like possessed. A lot. Was he under the control of the Demon Orc? Or another evil entity? Hard to say. Now the Hunky-Librarian, the Very-Beta-Aragorn and Cortana go off in hopes to "solve" the orc-human conflict. Very Beta-Aragorn has a Hunky-Soldier-Son (decent Burkely Duffield), who looks disturbingly similar to the Hunky-Librarian. What happened with casting in this movie? Did nobody think to stop to say "hey, you already have a bunch of similarly looking orcs, maybe, just MAYBE don’t also put similarly looking humans into it?" Now I am not saying Ben Schnetzer and Burkely Duffield are twins or anything but COME ON!

5. Also, did nobody stop to say: wait, this guy is only 36 should we really cast him as a father of a 23 year old? I mean sure, there are young fathers out there, but this just looked laughable. But most of the poor casting choices regarding similarity or age gaps pale in comparing with the really big one: the poor acting. Of almost everyone involved. Ben Foster is usually a safe bet, but here he was left with very little other than acting out his last taco-feast-gone-bad moment. Paula Patton (constantly sniffing something in the movie) was ok, Dominic Cooper had one good moment (toward the end of the movie, I am sure you know which one I am talking about) spoiler: yeah, the one where he died. But other than that, it was a mess and it had scenes when it was painful to watch the acting. And all I could think of was: cut away, please cut away from his face, he can’t act, don’t let us watch it for too long, maybe there is still time for his agents not to notice!

6. The only truly interesting moment was during the last battle. Big Spoiler: the talk "better if only one of us dies, then both of us" was not a strategic gold, given what happened after she followed through with his recommendation to be killed, but at least it presented some real internal conflict that we could understand and for a fleeing moment feel something for someone on screen in this movie. Unfortunately that passed shortly after, when it turned out that the "big good moment" was really fairly useless and was just supposed to set up the need for a sequel. Help us Orc all mighty and protect us from it.
7. Was the CGI good? I guess. A lot of money and effort went to it that's for sure. Although everything was too green or too brown for my taste, with not enough colors or emotions shown in between. And the personality-free orcs just reminded me of the similarly expression-less aliens in John Carter. Oh and if you have a world of creatures that are of different colors and body shapes then the humans as we know them, how is one supposed to know that an oddly-shaped blue baby is not a good thing? Until the (what I think was the Demon Orc) kills a deer just to revive the baby, I didn’t even realize something was supposed to be wrong with it. Just saying, that for those of us that have never been exposed to the visuals of Warcraft before, there was a LOT of trying to catch up with its antics and understand what the orc is going on. Incomprehensible magic, spells and weapons aside. I am just looking at the very basic rules of the world and it's creatures. Those were incredibly hard for me to figure out and follow, and although some people may think I am slow, I am not a complete moron. If I can follow The Big Short and understand what a synthetic collateralized debt obligation is, I should be able to figure out if a blue-orc-baby is worth rejoicing or crying over. Or maybe it’s the lack of naked busty ladies that had the running commentary in the Big Short? Who knows.

8. What I didn’t like about the movie: the interchangeable characters (on both sides, for orc's sake). The abundance of characters to begin with. The visuals that looked too monotone after a while.  The whole movie shrieking with under-development of any realness, but at the same time the oh so many internal rules, spells, weapons, and laws and lands that I couldn’t possibly keep a track of. Not to mention the names. Hints for the creators: if it takes teenagers months to master their understanding of the world within a videogame they spend hours a day playing, two hours in the cinema might not be enough for the audience to understand what the heck is going on, without previously having read a manual on it. Also, if nobody in the movie is called anything humane, how the fuck are we supposed to remember who is who, and orient ourselves in the story when they refer to each other? Same goes for the names of places. Nice of you to mention the name of the fort once to begin with, but did you really expect me to remember: Azaroth, Lothra, Mervith, Ghadgar, Duilothra, Garona, Ordrgim, Gulham, Frostwolf and such? Couldn’t you have thrown me one "Harry" or at least a "Frodo" or something that would be easier to remember? What a mess! Mind you I only name these because I looked at the character list just now. Otherwise all I'd remember is: King, Demon Orc, Slightly less Demonic Orc, Maybe Good Orc, Possesed Dude, Very-Beta-Aragorn, Hunky-Librarian, Hunky-Soldier-Son and Cortana.
9. What I liked about the movie: the one scene of meaningful dialogue between The King and Cortana.  Some of the action scenes were interesting. Trying hard to come up with something else. The visual effects? Yeah, I will go with the visuals - the Eagle and the Snow-Wolf or whatever the heck it was they rode on (and that was supposed to understand the concept of blackmail), looked pretty good and all.

10. Who is this movie for? For fans of Warcraft. For fans of Orcs of all shades of green and brown. For fans of CGI. And for fans of no good, no fun, no character development and poorly acted live action movies. This one is for all of you out there, buy tickets, give the movie great ratings, buy the DVDs, stream it and enjoy it for the rest of us, so the mega-talented Mr. Duncan Jones gets to make more flicks. Let’s just hope they are closer to the delight that was Moon than the mess that was the tale of Azeroth.